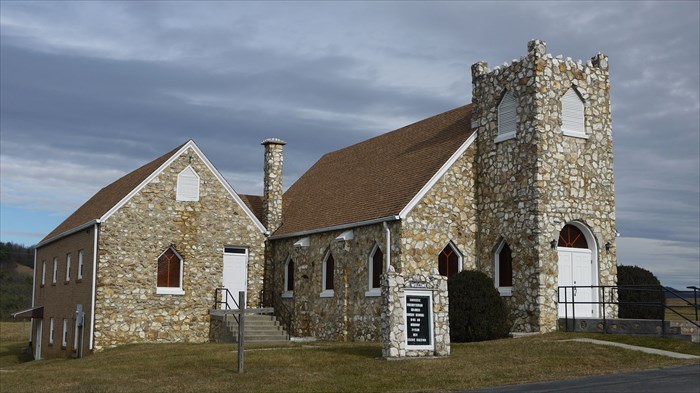 Situated at the highest point in the area, above 2,636 feet in elevation, the Dinwiddie Presbyterian Church and Cemetery in Carroll County are the farthest, about thirteen miles, from the mother church at Buffalo Mountain. From the church grounds, far-off mountain peaks are visible in all directions. Closer by are cleared pasturelands and a few residences along the roadways. Work on the church foundation began in July 1946 without architects or plans. Rev. Childress and Richard P. Slate laid out the building footprint. Most of the fieldstone facing came from Buffalo Mountain, hauled in a World War II Weapons Carrier Childress had purchased from army surplus.

Rev. Childress personally directed construction of the Dinwiddie Church fieldstone altar and pulpit, which remain unchanged today. The first service was held in September 1948. In 1953 Childress purchased an acre of adjoining property at auction for $2,000, a price far beyond the church’s budget. He paid for the purchase with a personal loan from the Bank of Floyd.

You will find that this church has a brief but very charming history. We were organized as a congregation on October 31, 1897. The church is named in honor of the Rev. Dr. Dinwiddie, a Presbyterian evangelist, who made it his life’s work to organize churches during Virginia’s early years. Dr. Dinwiddie was one of a number of Presbyterian pioneers in education as well as Christianity in Virginia.

Dinwiddie Presbyterian Church did not begin in the present building. The church began outside under a pine grove in what was then known as the Cook Community in Carroll County, Virginia. A small group of Christians gathered every Sunday on benches under the pines to worship God. They were guided by their first preachers: Dr. George Gilmer, Dr. Riff, and Mr. Jake Lindsey. This pine grove was located where the picnic shelter (to the left of the church) now stands. The members came from Hillsville, Sylvatus, and all over the Pine Creek area of the county. They had no musical instruments, but their singing was still said to be more beautiful than any organ music. Sometime after the church was organized, Mr. Steve Mitchell bought a small organ which was brought to the pine grove every Sunday morning for the worship services.

The people decided to build a combination church and schoolhouse around the turn of the century. The early congregation which Dr. Dinwiddie brought together in 1896 represented three denominations: Methodist, Christian (Disciples), and Presbyterians. When the first building was destroyed by fire, another building was erected on the same location. Dinwiddie Presbyterian Church struggled to survive in those first years, and was often without a pastor. But God provides.

The Rev. Robert W. Childress came to Dinwiddie in March of 1946. The offering that was received on the first Sunday Mr. Childress preached was offered to him for his services.  It was a grand total of $5.60.  Mr. Childress suggested, “Take this and start a building fund for a church.” Small though it was, it grew with the encouragement of Mr. Childress. Our current building is the result of his leadership, as well as some sacrificial giving by many members of this church and of the community. Dinwiddie Presbyterian Church is one of six stone churches that Mr. Childress built. The people of this church and the building itself were his pride and joy.
Construction of the sanctuary was completed, and the dedication was held on September 6, 1953. Plans were made and construction began on three additional Sunday School rooms in the fall of 1956. The church then built the manse (a home for the pastor) on the old schoolhouse lot across the road in 1958. The land was purchased from the Carroll County School Board in October, 1953.
~ Dinwiddie Presbyterian Church website